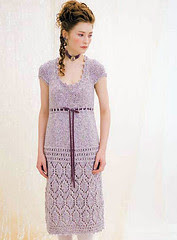 i just cast on louisa harding's marie from the book dauphine. the yarn is thalia, a gauze yarn. i am using color 7.

i finished the vest i was knitting, or at least i finished knitting it. i just need to block and assemble it. i finished assembling and embellishing the taos shawl, i need to take pictures! 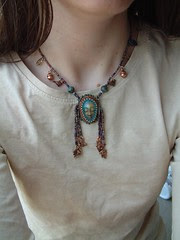 this is another necklace i made for myself. the face is carved bone, dyed with tea and easter egg dyes. i glued it to Ultrasuede and beaded around it in peyote stitch. this necklace also features a selection of copper charms.

Posted by Megan Noel at 6:34 PM No comments:

birds of a feather necklace 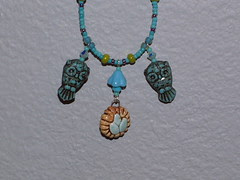 birds of a feather necklace
Originally uploaded by megan_n_smith_99

i made this little necklace this morning using 2 glass owl beads and a bird's nest charm from http://www.earthenwoodstudio.com/.

it's actually nice out, so i think i will head outside with my book soon. last night my friend nusz and i went to see Prince Caspian. Even though they strayed from the book more than the 1st movie, we still quite enjoyed it! i <3 reepicheep! 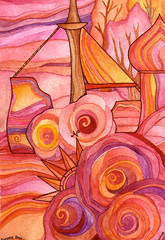 i am very happy with how this painting turned out. i think i will be doing some more in this vein. it is so nice to have my paints to come home to in the evenings. i was so tired tonight i almost did not paint, but i am glad i did.

i listed this on etsy. 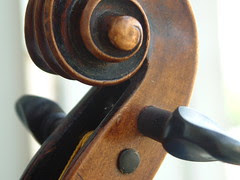 yesterday was a very relaxing day. not terribly productive, but very relaxing. i slept in. then i was putzing around with henry and decided he needed to visit the violin doctor. (duane lasley or lasley and russ.) so we went down the street, dodging people who had come for the norwegian independence day festivities. it certainly was a lovely day.

henry got a tune-up. janusz, i am sorry to say that even between the two of us henry was a bit flat. but he's all set now.

i love duane's luthier studio. first of all there are violins, violas, cellos, and a few other oddments like mandolins, everywhere. handing from rows on the walls, in bits of pieces on worktables and shelves, wood shavings all over the place, cases in drifts along the walls, books leaning against each other for support on the shelves. everywhere the patchwork of various polished woods. i saw a small viola that i am afraid i was a bit smitten with. hm, probably a good thing i did not ask how much it was.

then on the way home, i stopped to get coffee. i found out my favorite barista, in addition to having studied physics and mortuary science, and in addition to having a PT gig making sexy lingerie for girls with tiny waists and shapely bottoms, used to play cello. but she sold it when she moved cross country. and that made me sad, but we did wax poetic about christine fellow and she gave me a list of more music to seek out.

other than that, there was knitting, painting, and sitting in the sun. hopefully more of that today. i really do need to tidy up but it is awfully tempting to wait until the clouds come back. it was quite hot for seattle yesterday, at least the upper 80s, but right now there is a lovely cool breeze off puget sound blowing right into my west-facing windows.

Posted by Megan Noel at 9:37 AM No comments: 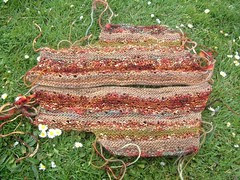 i wish i had more time for knitting! these are the fronts of my painter's vest. though there is a chance, sadly, that i will have to take some out. i am not sure yet. the pattern i was working off had some mistakes and i have not figured out if any were in this part. (the designer sent me a revised version.) i am more than half way through the back now, and loving it. there is a bit of a sort of washed out turquoise in the back. i could make one of these in every color.. if i had time. i especially want to make one in beachy misty greys. there is some yarn i have used in the past that is a mohair of mousey brown-grey with little white fluffs in it, like pussy willows. i wish i had any idea what it was so i could get some more. this weekend is supposed to be nice out. perhaps i will get to sit outside and knit. that would be lovely. i would not mind doing some painting as well, though i usually do that indoors. i would like to take a few days off to work on art, but this time of year everyone is taking time off, so it seems best to wait till people have that out of their system a bit before i take a few days off. 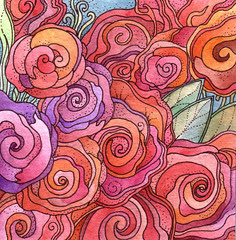 another new artwork on etsy. goodness. stressful day, stressful week. but now i am home. i stopped to get my brows waxed, which is one of the few girly things about me. and i don't do that very often either. and now i am home on the couch with my laptop, thinking of what i might do this evening. perhaps knit, perhaps paint, perhaps read a book. sometimes it is quite nice to live alone. no one is asking me to feed them or amuse them! although, no one is offering to feed me, either. i am tired, i might have to resort to toast for dinner..

Posted by Megan Noel at 7:01 PM No comments:

a day or roses

i have not listed anything on etsy in a long time, because i have been making art for gifts and experimenting with some different things.. but today i listed 3 new ATCs. 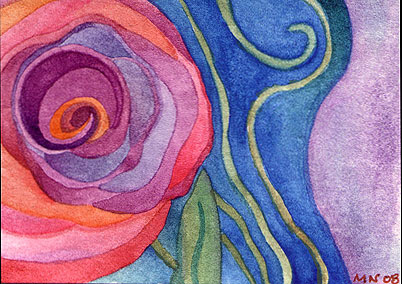 i have been reading and rereading a lot of kid's books lately.. i don't know why, but work has been stressful, so maybe it is escapist! i just re-read two childhood favorites by Joan Aiken: The Wolves of Willoughby Chase & Black Hearts is Battersea. I did enjoy them, but I think I had an easier time "willingly suspending my disbelief" as a child. I could go on for a few paragraphs about all the coincidences and improbabilities, but I think I will only mention the unlikelihood of a babe being successfully raised by otters and leave it at that. Still, fun books and I will read some more in the series.

Posted by Megan Noel at 6:31 PM No comments:

my mother and i celebrated mother's day today. we went to the seattle weaving work's sale (her idea, honest! not mine..) and then out to brunch.

i painted Among Seahorses for my mother.. It is 16x20" framed and matted. I did it all in watercolor. also i made her a pair of seahorse earrings (plus two other pair I forgot to take pictures of..) and of course, a card: and we had fun at the yarn sale. this is not all for me, i bought some for a gift too: 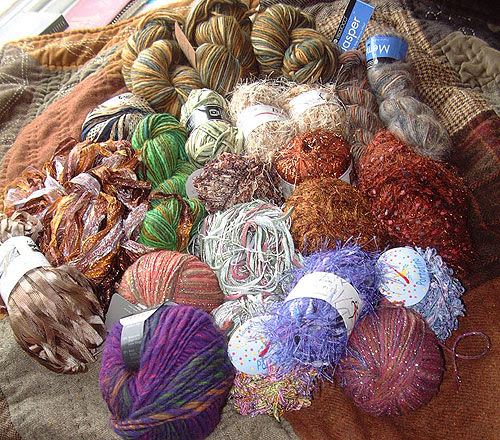 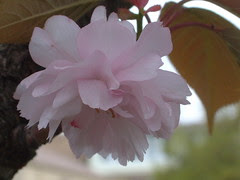 yesterday i went for a walk with my camera. i took photos of flowers, mostly, which was appropriate since it was May Day.

May Day is half way between the Spring Equinox and the Summer Solstice..

Posted by Megan Noel at 7:48 AM No comments: