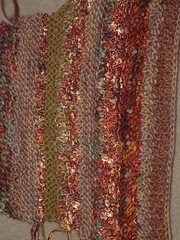 i am working on knitting a pattern called "painterly vest", designed by jane thornley. it's a really fun pattern that allows for improvisation. this is just one of the 2 front pieces. i have finished them both now and have started on the back, you can see the jane's version and order her book and patterns on her website www.janethornley.com. i really like all of her patterns and her style in general. not to mention i like things where i can use whatever yarn strikes my fancy out of my hoard,

Posted by Megan Noel at 8:02 AM No comments: 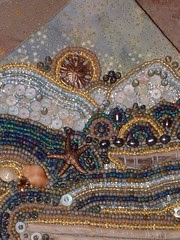 I finished the april house. this is one of my favorites. all the ones inspired by Vashon Island (my childhood home,) are my favorites. I incorporated shells, and driftwood that I found on Northwest beaches, and some purchased shel beads, plus freshwater pearls and copper charms and seed beads. beaded and hand quilted on batik from Bali. 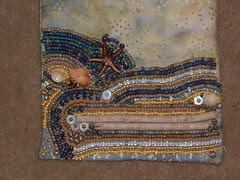 this is my april beaded house so far. another piece inspired by my childhood island home. this piece incorporates shells and shell beads, some i collected myself on northwest shores, and small pieces of driftwood i collected. also seed beads and a copper starfish charm. 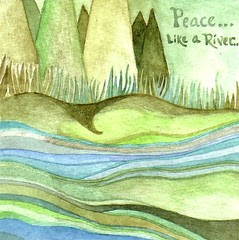 happy earth day. it is, so far anyway, clear and sunny. while i was walking to work a guy on his bike, from the sierra club, stopped me and gave me a little envelope that said "thank you for bikinh, bussing, or walking to work today!" inside were lots of coupons, for espresso, bus coupons for 2 local transit systems, etc. definately coupons i will use. it was kind of cool. anyway, it is earth day, and i love the idea of that, so i am going to try to have a good day today -- the last week has been a bit rocky. (i did not mention that in addition to my grandfather dying, my cat dangermouse was hit by a car and died. and then there was a falling out with my main social group, so all in all it has been a bit bleak. but today is earth day and it is beautiful out... so!) 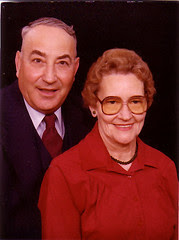 this picture of him, and my grandmother was taken in Dec 1978, the year they retired and sold the Jackson family farm.

from the Rensselaer Republican:

John was a 1932 graduate of LaPlace (Illinois) High School. In 1956 he moved to Rensselaer from Westville. John was a farmer for 46 years. He was a member of the Trinity United Methodist Church of Rensselaer, the Prairie Lodge No. 125 F & AM, Supreme Lodge No. 765, F.& AM and the Eastern Star, Remington Chapter.

John was preceded in death by his parents, his wife Ruth and one brother.
The family will receive friends at Jackson Funeral Chapel of Rensselaer from 3 to 8 p.m. with Masonic Services at 7 p.m. April 23.

Funeral Services will be held at 10:30 a.m. April 24 at the Jackson Funeral Chapel with Pastor John Hostetter officiating. Interment will follow at Roseland Cemetery, Francesville. Memorials may be made to the Trinity United Methodist Church. 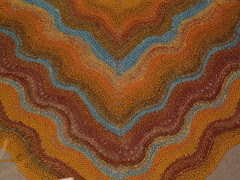 the taos shawl is now done except for the finishing. i am going to crochet a border and probably add some bead tassels in a couple spots. it has not really been blocked, so some of it looks a bit wonky here. or possible there are some mistakes but i am trying to let the beautiful colors distract me from those. 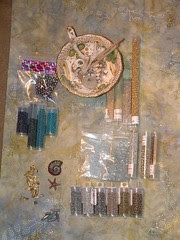 yesterday morning i gathered supplies for the april beaded house. it is to have a beach theme -- another autobiographic piece about my childhood island home.

i got a start on things while watching dvds yesterday, i will show you my progress soon.

regarding the dvds:
Juno: i give a wholehearted two thumbs up. original and quirky story, direction, music, casting, and acting.
Nancy Drew: it had it's moments. and then it had its other moments. i think i could have polished up that script if they asked -- for some reason they didn't. puzzling.

Posted by Megan Noel at 9:56 AM No comments: 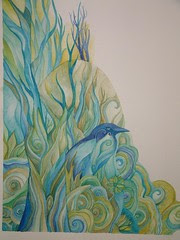 this is my latest painting in progress. i did not really start with any expectations or much of a notion beyond a color palatte. i started with some of my standard fare, trees branches, abstract roses/circles/spirals, added in a blue raven, and that lead to the abstract egg form just behind him. we'll see where this all leads. the finished painting will be 16x20". 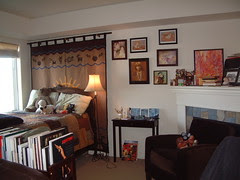 i often feel bad that my little world has so much stuff in it and little bits of this and that. but when i look at photos of other artist's studios.. frankly they are usually pretty messy. i think i actually do pretty well given that my studio is a 515 square foot condo where i do everything -- eat, sleep, read, knit, watch tv, and make art. of course for some big cities 515 square feet is considered spacious. but in the northwest where i live, if you tell someone you live in a space that small you can watch the blood drain from their face.

it would be awfully nice to have more wall space for art and to have an art studio i could close the door on. but meantime i get by okay. this is my little condo. it is pretty cozy. i have lots of art, and toys, and books, and art supplies. today it is clear out and i have a view of the olympic mountains from my balcony. more pictures on flickr. 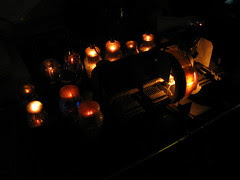 my friend audin is a mad scientist. this is his latest project, a tube radio he is restoring. ( philco 112 lowboy from 1931) you can see more pictures on his flickr account. pretty nifty, huh? i have not listened to it yet. the last time i saw it, it was in pieces. now it is mostly assembled.

anyway, i was thinking of audin when i was looking at the new book i got in the mail last night.. susan lenart kazmer's new self published book which you can get on her site here:
http://www.susanlenartkazmer.net/

i think that audin's mad scientist workshop would be the perfect place to find bits for a susan lenart kazmer style necklace. in fact, i think i should start training audin's cats to look for trinkets on the floor and hide them away for me.... (you can also see pictures of audin's cats on his flickr account.

Posted by Megan Noel at 3:13 PM No comments: 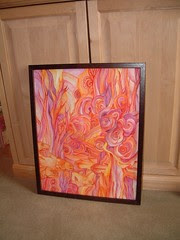 this is my largest watercolor to date. admittedly i need to take better photos.. but i am pleased with how it came out. it is called Forest of Fossil Fish (In reference to the Coelacanths, "Living Fossils")
It is 16 x 20". There are more photos on flickr.

Posted by Megan Noel at 4:59 PM No comments: 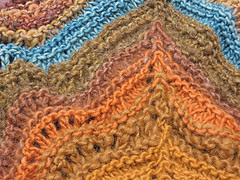 this is the shawl i am working on, my Taos shawl. as i mentioned, the yarn came from La Lana Wools in Taos NM. The wools are all hand dyed with natural dyes. I got them on my trip to Taos in October to make a shawl to remember the beautiful colors of the landscape by.

You can see another photo on flickr or see this photo bigger by clicking on it!

The Pattern is the Fan and Feather Comfort Shawl Pattern.

Posted by Megan Noel at 1:24 PM No comments:

raven purse from the archives

i have not made any purses in quite a while, but i think it is about time i made a new one for myself. this one, as i recall, was a commission. i made it in 2006. i thought you might enjoy seeing some photos. click thumbnails. 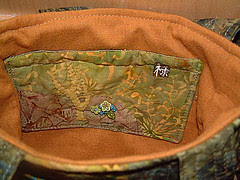 girl with spinning wheel / the dark is rising 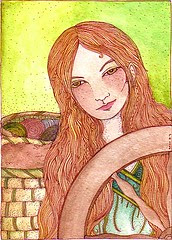 this is a painting from last year. uh, spinning wheels are hard to draw. have you ever tried? they are. i forget how big this painting was, but probably around 5x7". i wanted to post something but i have not been making much art this week -- i am down with one of those spring flus that makes you want to sleep for a decade or so. i have done a little knitting, a little reading, and a lot of sleeping.

the movie is based on susan cooper's novel, the dark is rising, which is part of a series. i loved these books as a kid, and still do. there were several changes made in the movie, and i will not post any spoilers:

1) in the film will is several years older than in the novel.

2) in the film the stanton family is an american family living in england, rather than a british family.

3) the film is set in contemporary times, and features camcorders, google, digital watches, and other such modern things. perhaps this was done to make modern audiences feel more comfortable, but i think they should have given the viewer more credit. after all, the Narnia movie was not set in the present and was very well received. (thank goodness they did not modernize it!)

4) since will is older, a love interest is added. i did not feel this enhanced the plot.

5) will's relationship with one of his siblings has changed, in a way that could have enhanced the plot, but in my opinion did not.

6) some things about physics were added which could have enhanced the plot if the writing had been a bit better.

7) a major character was cut, though i believe some of the scenes were filmed and just not used -- why?

8) the relationship between will and meriman was much more interesting in the novel.

the actors were all well cast, at least there is that, especially will, gwen, and the old ones.

so. sadly. i just can't quite recommend it unless you are dying of curiosity. i am not sure if they intend to film the other books in the series, but if they do i hope they do a better job. it was such a good novel, i really feel they could have come up with a classic if they had stuck to the original story and taken a little more care. as it said the acting and casting were pretty good, just the script was not..

Posted by Megan Noel at 7:04 PM No comments: