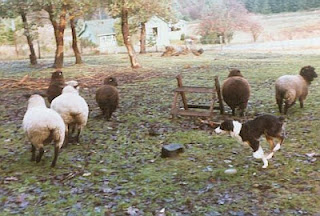 One of the denizens of our farm was Brandy, an Australian Shephard.  Australian Shepards were actually bred in the US, not Australia. They were used to herd Australian sheep, though. Our sheep were mostly Romney and Dorsets, which are British breeds.  This photo actually includes 2 guest sheep - I think. The two on the left I think were visiting for the purpose of being bred with our ram. We mostly raised colored sheep and had many shades of grey and brown. I think the sheep on the far right of this photo is Cinnamon, a bossy and fierce ewe with greyish brown wool and warm brown hair on her head, like fringe. She had steely grey eyes and was not afraid to stare down the enemy and stomp her foot. The enemy would be any person not carrying food, and strange dogs.  Brandy was welcome.

But the thing about sheepdogs is that while they are born with a herding instinct, they are not born knowing what to do with it.  I believe also they are generally very docile and companionable, having been bred to care for other creatures, and as such you could leave them alone with your free range chickens and not need to count the chickens when you came back. Brandy practiced his herding on both sheep and chickens but only did the right thing occasionally by accident.

Brandy never did, for whatever reason, go and get his herding training from older sheep, which is the thing one does. I am not sure why since his parents lived on the island. One of them, the mother I guess, herded Jacob sheep. I desperately wanted to get some Jacobs because they are spotted. However they also have horns, sometimes multiple sets, which I suppose increases your odds of accidentally being gored to death but an irritable flock.

For some reason, throughout my childhood, there was a poster of sheep on the bathroom wall.  So instead of reading the newspaper or Garfield comics when in the bathroom (Garfield was still funny back then), I studied breeds and make shopping lists for future additions to the herds.  Not that my expertise was ever consulted.

I'll share one other bit of sheep lore.  I think this was one of those things you are supposed to do but I don't know how you know you are supposed to do it. We did have a couple of sheep books on the shelves in the living room so it may have been from those books.* You're supposed to have one sheep who is the boss sheep, and she wears a bell, and all the other sheep follow her around. When its feeding time the boss sheep runs towards the barns and all the other sheep trail after.  I think you are supposed to pick a strong and independent sheep to be the boss.  Our first boss was Gabby, who was not really all that independent, but she was very friendly and seemed to like people (especially people holding grain, hay, grass, or apples) and she wore an old cowbell that made a hollow clank-clank. Later after Gabby died Cinnamon, the mean-eyed old Doe took over.